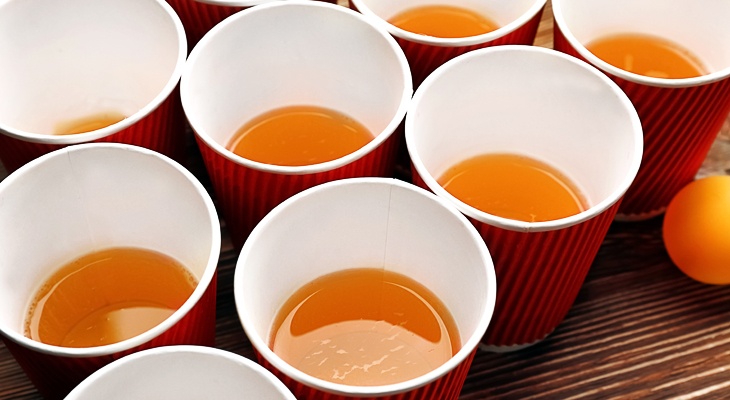 When you think of fun college parties, beer pong immediately springs to mind.

The game has been a hit with college students all over the US for a few decades now. That's probably due to the fact it's competitive game of skill combined with the social aspect, and of course, the alcohol!

Did you know that there's an official beer pong table?

Why you Need an Official Beer Pong Table

A lot of college dorms and households around the country will grab any old table and try and transform it into a beer pong table. This might seem like a good idea at the time, but it really isn’t anything like the real deal. Investing in an official beer pong table is important because it gives you a better game, it’s designed to be strong while playing and it’s completely waterproof.

If you’ve ever lived in college dorms or attended a party where the alcohol's flowing, then you’re probably familiar with the game of beer pong.

Beer pong consists of two players, standing across from each other at a long table.

The players then take turns bouncing a ping pong ball once on the table with an aim to land in one of usually six to ten red solo cups, arranged in a triangle. If the ping pong ball lands in a cup, it has to be drunk, there and then, by the opponent.

It may be at first, but not so much after a few drinks! The game definitely brings the laughs, but sometimes it can get messy. Cups can get knocked over easily and if there's not enough space, it can make it difficult to play.

However, did you know that there's an official beer pong table size?

Regulations say that beer pong tables should be seven to eight feet in length, two feet across, and 29 to 33-inches in height. They should also provide an efficient bounce. 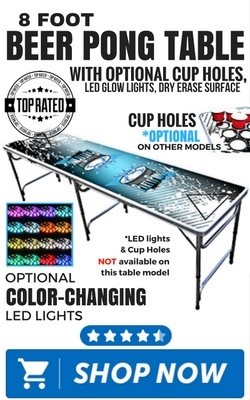 Party Pong Tables has the ultimate beer pong table for those serious about the game.

The company specializes in beer pong tables so you know you're getting a quality product from a company that know the best way to bring the beer pong game,

Their 8-foot professional table is in full color and would be the main focal point to any party. It's also two feet across as per official regulations.

The table top has a wax finish that protects the surface from any spilt liquid. The frame and legs of the table are anodized aluminium, making it one of the strongest tables out in the beer pong table market.

It can withstand extreme temperatures and you can use it indoors or outdoors.

When you’re done playing, you can clean it easily with a wet cloth and folded conveniently into a 2x2-foot case.

It weighs less than 30 pounds! It also comes with six ping pong balls and an attached ball holder so you won’t have to keep losing them.

This table by Party Pong Tables has optional features for an additional fee.

First, it has optional cup holes, perfect for your standard red solo cup, making sure spills are kept to a minimum. It also can come with colorful, battery-powered LED lights around the table, making it perfect for parties.

If you don’t care for the colorful looking table print, you can also opt for a dry-erase version. Doodle your own design! Whether you get the optional features or not, this is still a great table.

This beer pong set up by Party Pong Tables is one of the best official beer pong tables due to how convenient it is.

As mentioned before, it can be folded up and stored away out of sight. When assembled, the height can be adjusted to three different settings.

This table is 8-feet long and while it should be able to fit into most rooms comfortably, you'd need to make sure you have plenty of space for the table and the players.

The design may not be for everybody, but if you prefer something else, you can opt for dry-erase or professional version table.

Also, if you decided to get the pre-cut cup holes, it comes arranged in ten holes. You won’t be able to get another triangle if you wanted to play exactly by the rules if you were starting with a lower amount.

If you didn't want the cup holes, there's a triangle marking at each end of the table to help guide the cup setup.

Whether the party is at your house or you want to bring it to another party, this table is the best for playing and easy moving/storage.

You can unfold it and be playing in minutes with this purpose-built table.

Get the party started with this official beer pong table!

Here's a video tutorial on how to increase your chances of winning beer pong.